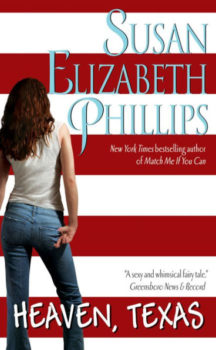 Anyone who reads my books knows that I love epilogues—reading and writing them. I want to know what happens to the characters after the book is over, and HEAVEN, TEXAS is one of my few books missing that information.

I originally wrote an epilogue for that book, but ended up cutting it because I liked the present ending better. This had led to countless inquiries over the years about Gracie Snow and Bobby Tom Denton. Did they stay in Telarosa? Did they have children? Were Way Sawyer and Suzy Denton happy? What were all of them doing with their lives?

I’m delighted to tell you that I was digging into my files not long ago and found the original unpublished epilogue to HEAVEN, TEXAS. Enjoy!

Bobby Tom wrapped his arm around the boy’s shoulders. “That’s her way, son.”

“But, Dad, she’s arguing against her own daughter!”

“Your sister understands. Wendy knows how Mom feels about being fair. And that ump has been paying more attention to his girlfriend than the game.”

Danny, a homely little critter with red hair, freckles, and a face he wouldn’t grow into for years, couldn’t have caught a ball if it had glue on it, and he had a hard time seeing the point of organized sports. “I don’t understand why you’re not coaching the team. You know a lot more about this stuff than Mom.”

“She won’t let me. She says I put too much pressure on the kids to win.”

“Your mom pretty much knows me like the back of her hand. That’s why I let her boss me around so much.”

“You boss her around, too,” Danny said. “Just yesterday, I heard you tell her if she didn’t get herself up to the bedroom in two seconds, you were gonna turn mean.”

Bobby Tom smiled. “She had laundry to fold, son.”

“I don’t think it had anything to do with laundry. You guys were kissing again.”

Bobby Tom laughed at the expressions of pure disgust on Danny’s face and risked his son’s wrath by planting a quick kiss on top of his head. Out on the field his ten-year-old daughter Wendy waited patiently for her mother to finish pointing out the path of righteousness to the teenage ump, even though Wendy knew she was going to be called out by the time Gracie was done.

Wendy Susan Denton was already on her way to being the finest female athlete anybody in this part of the country had ever seen, but in Bobby Tom’s mind, she was Gracie’s daughter through and through, with her mother’s same reverence for fair play.

“Grandpa!” Danny jumped up as his grandfather came over to sit next to them on the wooden bleachers.

“Hey, Danny Boy!” Way Sawyer hugged Danny and then glanced toward the field. “Gracie’s doing it again, isn’t she? Arguing with the ump against her own team—her own daughter!”

“Yep,” Bobby Tom replied. “Nobody except Danny has the nerve to tell her she’s making a fool of herself.”

Way shook his head. “People around here don’t like to mess with Gracie too much. Never know what she might do.”

That was for sure, Bobby Tom thought. Gracie Snow Denton was the sweetest little pain in the ass Telarosa, Texas, had ever known. She’d turned Arbor Hills into one of the finest nursing and convalescent centers in the state, and she’d instituted so many do-good civic projects that he’d just about lost track. Now she was the town’s mayor, something even he hadn’t seen coming.

Way nodded toward his granddaughter on the field. “You’ve got to do something with that child, Bobby Tom. The most talented athlete we’ve had around here since you were a kid, but most of the time she doesn’t even know what the score is.”

Bobby Tom’s eyes glimmered with pride. His daughter would always play more for the pure joy of sport than the final score.

“Couldn’t you at least talk her out of wearing those hair ribbons and ruffly socks on the field?” Way complained. “Doesn’t look right.”

“Historically speaking, us Dentons like to look good even when we’re in uniform.”

Danny wrinkled his nose and turned to his grandfather. “Dad says you and me have to let him help us trouble-shoot that new circuit board we’re building. But remember how he messed up last time.”

Way shot Bobby Tom an amused look then turned his attention back to his grandson. “How’s your dad going to learn anything about electronics, Danny, if we don’t keep working with him?”

Bobby Tom chuckled and thought about how much more difficult it would be to raise a son with an astronomically high IQ and a passion for electronics if he and Gracie didn’t have Way and Suzy helping them out. Bobby Tom’s friendship with his stepfather had been one of the many additional joys in his life since he’d married Gracie. Another had been running the Denton Foundation, a job that had proved more challenging and more rewarding than he’d ever imagined. Although Blood Moon had done all right at the box office, he’d never regretted giving up his film career. He didn’t like anything that kept him from Telarosa for too long.

To no one’s surprise, the ump fell in with Gracie’s way of thinking, called Wendy out, and the game was over. The minute Wendy could get away, she ran to him, all liquid power and leggy grace. Throwing herself in his arms, she began to chatter. “We had so much fun today, Daddy! Did you see Kimmie catch that fly, and did you see my home run. I did just what you told me. I swung real smooth. Can we go get ice cream now?”

Way interrupted. “I’m taking both you and Danny for ice cream, and then Grandma’s invited you to sleep over at our house tonight.”

As the kids cheered, Bobby Tom regarded his stepfather. “I don’t know anything about this.”

Gracie’s coppery curls bounced as she came up beside him and pecked his cheek absentmindedly. “Now don’t start yelling at me,” she said. “Wendy was out, and the fact that she was on my team—”

“Not to mention your own daughter.”

“Fair is fair, sweetheart.” She gave him the generous smile that still made his heart swell. Gracie had a way of looking at him that left him feeling like the luckiest man in the world.

The children hugged their parents and set off with their grandfather. Bobby Tom watched them go and turned to his wife. “What kind of mother abandons two innocent children to grandparents who are going to stuff them with junk food and keep them up past their bedtime?”

“A mother who wants some uninhibited sex with her husband.”

“I was hoping you’d say that.” He grabbed her hand and pulled her toward the family van. Fifteen minutes later, they were standing in their living room, warm and homey in the fading light, simply holding each other and feeling blessed. Bobby Tom finally broke the silence. “Whose turn is it?”

He lifted an eyebrow. “You’re a liar, sweetheart. It’s mine and you know it. Tonight, every inch of that beautiful body of yours belongs to me.”

“Sex trophies don’t argue, honey. They just do what their man tells them.”

Gracie hooked her fingers over his belt and tugged him toward the bedroom, a gleam in her eyes. “We’ll see who’s the sex trophy.”

The contest was fiercely fought but, in the end, undecided. They agreed to schedule a rematch just as soon as they’d phoned their children to tell them good night. 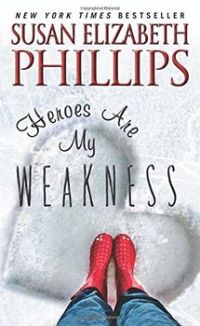