Panda Explains How He Got His Name

It was almost midnight. They were hungry and barefoot from a bad dinner and good sex. With the boat safely tucked inside the boathouse and water lapping at the hull, they lazed on the bench-seat in the stern. Panda wore only a pair of shorts while Lucy had on her underpants and a midriff-baring T-shirt.“You’ve never told me how you got your nickname,” Lucy said as she popped a Wheat Thin into her mouth.

“That’s right. I never did.” Panda uncrossed his bare ankles and gestured toward their snack stash. “Hand me the chips.”

She passed over the potato chip bag and waited. And waited some more. “Well?” she finally said.

“You know what I’d like right now?” He gazed inside the potato chip bag. “I’d like some beer nuts. You ever had beer nuts?”

“Yes, and I don’t want any more. What I want to know is how you got your name?”

He mustered up some semi-outrage. “I never said that.”

She gave him a smug smile. “Close enough.”

“I got the name when I was on the force, okay. And it’s embarrassing.” He’d stiffened up, as if she were prying out his teeth. Typical behavior from a man who hated revealing anything personal.

“Embarrassing?” she said. “All the better.”

He gave a long sigh. “Don’t you have something better to do than nag?”

“Later.” She’d lost interest in the Wheat Thins, but took another anyway, attempting to disguise how eager she was to hear something—anything—personal from him.

“I happened when I was a cop.” He set aside the chips. “I was a good shot. The guys would see me on the practice range, and they started calling me Panda. It means ‘pissed and armed.’”

“P for pissed. Then A-N-D. Add a final A for armed.” He spelled it out patiently. “P-AND-A. Pissed and Armed.”

She thought it over. “Creative.”

“Very creative,” she said. “So creative that… I’m not buying it.”

Now the indignation was real. “What do you mean, you’re not buying it? It’s my name. I should know how I got it.”

“And I’m sure you do. But you didn’t get it that way. What’s the real story?”

She waited for him to stonewall her—made up her mind she wouldn’t let him. He tried to sidetrack her with one of those sexy smiles that melted her bones. “What’ll you give me if I tell you the real story.”

She slipped her index finger under the leg of his shorts. “A night you’ll never forget.”

His eyes grew smoky. “You already did that.”

She expected him to keep trying to distract her. Instead, he turned away and absentmindedly rubbed a thumbnail. “There was this…little kid I knew. When I was growing up…” Even though he was sitting next to her, he seemed far away. “The kid couldn’t say Patrick, and somehow it came out as Panda, probably because of this book he had. I was around nine at the time, trying to be tough, but the guys I hung out with heard him say it. Naturally, they started teasing me. I got into a couple of fights, but that didn’t stop them from harassing me about it. Panda… Panda… Panda… Finally, I decided to own it.”

Of course he would. She could see him as a boy, sticking out his chin, puffing up his chest, daring the world to take him on.

“But when you grew up, you could have left the nickname behind,” she said. “When you went into the army. Why didn’t you?”

“I intended to, but…” He raked his hands through his hair. “Hell, I don’t know. I guess by then it had become part of me. A reminder of—” He turned his head, his gaze coming back to her. He leaned forward and kissed her. “Enough talking.”

“I like to talk,” she said against his lips.

“Uh-huh.” His hands were on the move, slipping along her ribs, under her T-shirt. “Here’s something you’re going to like a lot more.”

As it turned out, he was right. 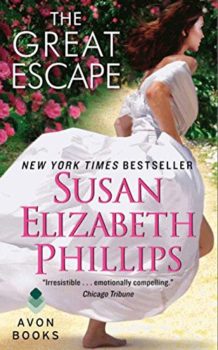